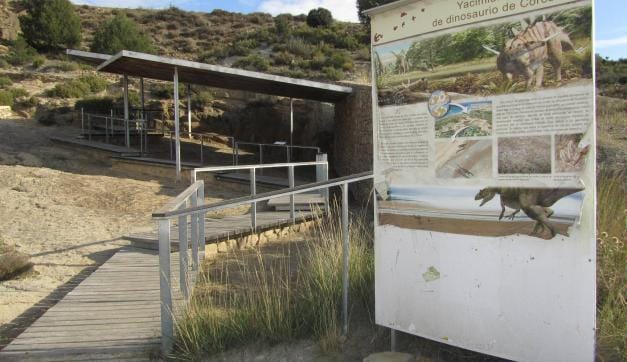 The Corcolilla Ichnological site, located near the village of the same name, is the most representative of the Alpuente dinosaur ichnite sites, and one of the best in our community. In 2006 it was declared a Cultural Heritage Site with the category of a palaeontological zone.

It consists of more than one hundred dinosaur imprints concentrated in a small space. Accessibility is optimal, because it is beside kilometre point 6.8 of the CV-350 road.

The site consists of materials of Limestone, Sandstone and Clay Formations of Villar del Arzobispo, of the Late Jurassic age, and is slightly over 140 million years old. The ichnites are located on a stratum of sandstones that represent, from a sedimentological point of view, the river deposits of a former meander.

More than 100 tridactyl ichnites have been identified, many of them organised into different traces. They correspond to the footprints of bipedal dinosaurs, theropods and euornithopods of small or medium size. Several morphotypes and sizes are distinguished within the group of the tridactyl footprints. The traces indicate multiple directions of movement of the dinosaurs, which would indicate that it would have been a very busy transit area.

In addition to the dinosaur prints, sediment desiccation cracks, ripple-marks and galleries excavated by invertebrates have been preserved in the site.

Nowadays, the site is suitable for visiting and has been protected from the effects of the weather by the installation of a protective cover. Walkways and viewpoints and a large parking area have also been installed and infrastructure with explanatory panels about the site has been provided. In a guided tour the visitor will be able to better understand how these prints came to be formed, which dinosaurs made them and how they were able to be preserved.