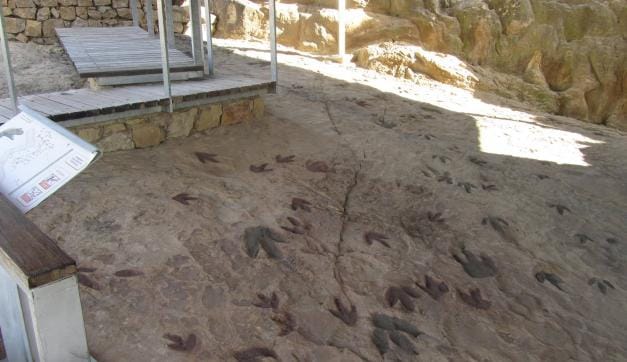 The ichnological site of dinosaurs of Cañada París is also located in the municipality of Alpuente, in the vicinity of Cerro judío and next to the road of Cuevarruz. It was declared a Cultural Heritage Site (CHS) in 2015.

The ichnological site or fossil traces of dinosaurs of Cañada París II is an important paleontological enclave dating from the Jurassic-Cretaceous transit period. It is one of the best preserved ichnological sites in the Region of Valencia, in which it documents the diversity of the dinosaur fauna of the end of the Jurassic Period in the easternmost part of the Iberian Peninsula.

The site is located on a level of sandstone in which various imprints of sauropod dinosaurs and non-avian theropod dinosaurs can be recognised. The ichnites are organised into two main traces, practically parallel, of a north-south direction: a trace of more than eight metres in length attributable to a sauropod dinosaur, consisting of 15 to 17 ichnites that correspond to hand-foot sets produced by the passage of dinosaurs.