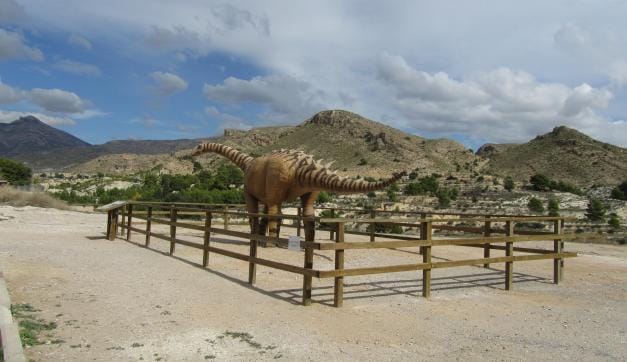 Near the town of Agost, in the province of Alicante, there is an internationally significant stratigraphic outcrop consisting of a sequence of marls and clays in which the transit between the Cretaceous and Paleogene Periods is recorded.

This transit was determined by the effects of the impact of a large meteorite next to the Yucatan peninsula (Mexico) that would lead to one of the most severe mass extinctions in the history of the earth, 66 million years ago.

This limit, officially the K/T limit from the German Kreide Tertiär (tertiary cretaceous) is more colloquially known as the “black Agost” layer. It corresponds to a dark clayey level, of around 10 centimetres thick that includes a very characteristic millimetric sheet of a reddish hue, with an abnormally high concentration of iridium and other chemical elements of extraterrestrial origin, in addition to the presence of microspheres of goethite (microtektites) caused by the high temperatures and pressure associated with large meteoritic impacts.

The origin of these components would be in the huge cloud of dust caused by the impact and that would eventually spread throughout the earth forming a layer that would block the penetration of sunlight, thus hindering photosynthesis and thus causing a mass extinction of species, both terrestrial and marine, among these, dinosaurs.

The black layer of Agost is one of the most studied K/T boundary enclaves in the world due to its exposure and accessibility, as well as the good lateral continuity of the outcrops. It is one of the three most outstanding sections of this episode in Spain; the other two are in Caravaca de la Cruz (Murciano) and Zumaia (Guipúzcoa).

The K/T limit of Agost has been classified as a place of special geological interest.