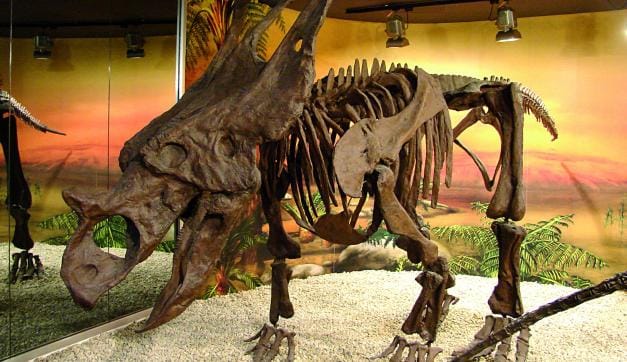 Marine reptiles, replicas of dinosaurs, remains of mastodons… A fascinating universe that leads us to the Paleozoic Period, with workshops and audiovisuals. All this and much more awaits the visitor in the MUPE.

The more than 1,200 fossil and models displayed within its halls provide a complete tour of the exciting history of life on our planet. It is made up of two floors. The lower floor is devoted to palaeontology in general, whilst the upper floor provides an profound insight into the geological history of the province of Alicante and its neighbouring areas.

Three halls recall, in order of antiquity, the three periods, Paleozoic, Mesozoic, Cenozoic, through the fauna and flora which existed in each era. Amongst the fossils which are on display, some of the highlights are the exceptional examples of trilobites, ammonites and a mosasaurio, a marine reptile. There are also replicas of dinosaurs, a skull of a T-Rex and model of a Spinophorosaurus nigerensis, a new kind of dinosaur from Niger, whose origins were determined by the team of palaeontologists at the MUPE.

The palaeontological wealth of the province of Alicante may be truly experienced through the displays on the upper floor, with examples of discoveries from Elche, Crevillent, Guardamar and Aspe, as well as from nearby areas, such as Morella and Ribesalbes (Castellón), Las Hoyas (Cuenca) and Quibas (Murcia), amongst others.

Amongst the stars of the MUPE, which is full of very interesting exhibits, some outstanding highlights are the original dinosaurs remains from Morella, impressive mammoth remains from Crevillent and fish in an exceptional state of conservation, which reflect one of the most important geological events in the history of the Mediterranean: its drying up.

In addition, the visitor may enjoy an area of temporary exhibitions, home at the moment to a display of minerals.

The MUPE is the only paleontological museum in the province of Alicante. In addition to treasuring part of the province´s rich heritage, it carries out research, conservation and educational activities.