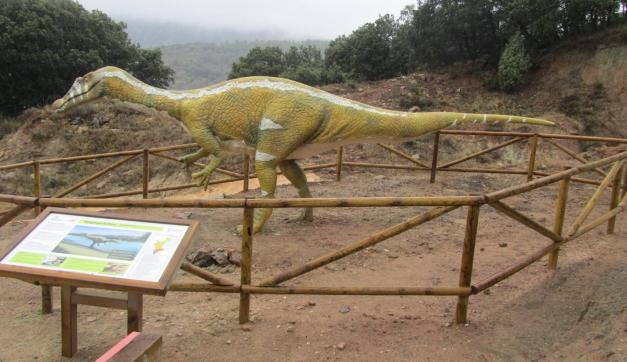 Located in the town of Cinctorres, the Dinomanía cultural park consists mainly of three types of resources focused on the world of dinosaurs: the Museum Collection, the dino-routes and the Ana paleontological site.

The Dinomania Cultural Park, located in the town of Cinctorres, is a scientific-cultural complex that allows the dissemination and sharing of the rich geological and paleontological heritage of Cinctorres. The Cultural Park consists mainly of three resources focused on the world of dinosaurs that each year are visited by hundreds of people: the Museum Collection, the ANA site and the Bibliosaurus-3D.

Inside the Casa dels Sant Joans we can find the “Ana, a living site” exhibition. The exhibition focusses on the paleontological work of the site. The exhibition is divided into three areas: the first, dedicated to the work of the paleontological team, the second, to the synthesis of the preliminary results of the team’s research and the third, to the methodology followed in the preparation and study of dinosaur fossils.

Its history, its findings and its peculiarities make ANA a unique site, which is bearing much scientific fruit.

“Bibliosaurus-3D” is a library or digital catalogue with 3D models of bones and dinosaur footprints from the province of Castellon, posted on the Internet at the disposal of students and the general public. It allows access to various 3D models of bones found in the ANA site. As such, the use of new techniques and technologies allows these replicas to be used for various educational activities in fields such as geology, biology, the environment and technology.